Nettlebed Common around 1900 from Windmill Hill. The large pond is the Sea Pond which still exists.

Nettlebed was the major centre for brick, tile and pottery manufacture in Oxfordshire from medieval times, and possibly even earlier, up until the 20th century. As the same materials are required for both brick and pottery manufacture, namely clay, sand, water and firewood, the history of these products is inevitably closely linked. There is evidence that bricks were used in the region during Roman times although no manufacturing sites have been found. After the Romans left England around 300A.D. the use of bricks declined until the 12th century although there is evidence that medieval potteries operated in Oxfordshire in the 9th century. Nettlebed and nearby Crocker End, situated on the top of the Chilterns escarpment on a rich bed of Reading Clay and with a plentiful supply of firewood and pond water, was a natural site for brick and pottery making.

700 feet above the surrounding towns of Reading, Henley on Thames, Wallingford and Watlington and on a cross roads of the highways to those places, the downhill gradients from the village brick and tile works eased the transportation of such heavy products. In the Middle Ages tiles for roofing and flooring seem to have come into widespread use rather earlier than bricks for walling. The use of roof tiles in particular was encouraged by regulations prohibiting the use of thatch in towns because of fire risk. Even in country districts records show that many domestic and agricultural buildings were roofed with tiles in the 14th century. In 1365 35,000 tiles were made for building works at Wallingford Castle. Tiles were costing 3s 4d per thousand at Nettlebed in 1390

Documentary evidence for the use of brick in the Middle Ages is difficult to assess because of the ambiguity of the Latin terms used. The word ‘tegulae’ tends to be used to mean not only clay tiles but also bricks and slates. The earliest specific use of the word ‘brick’ in Oxfordshire occurs in 1416-17, when Thomas Stonor made payment of £40 to Michael Warwick for making 200,000 ’brykes’ and a further £15 for their carriage from the kiln site at Crocker End, a hamlet in Nettlebed parish, three miles overland to Stonor House. It is almost certain that the bricks ordered from Crocker End in 1416-17 were used for the existing chapel at Stonor. The Stonor account of 1416-17 also records dealings with ‘lez Flemyngges’. There had been a long tradition of brick usage in the Low Countries and Flemish influence can be detected in many early English buildings. Whilst many local names today include families associated with brick, tile and pottery making over the centuries, interestingly there are no names having obvious Flemish origins. Undoubtedly though the industry was built on the skills of these immigrant workers. The consistency of early brick production was often somewhat unpredictable due to poor control of the firing of the updraught kiln design. In particular the bricks exposed to the greatest heat would bake a darker red or purple, and their ends would turn blue-grey and vitrified. The Stonor examples furthermore appear to have potash deliberately introduced to produce an emerald green glaze. When interspersed with other colours attractive patterns were produced.

Nettlebed brick was renowned for its strength. Dr Robert Plot in his ‘Natural History of Oxfordshire’ of 1676 said “About Nettlebed they make a sort of brick so very strong that whereas at most places they are unloaded by hand, I have seen these shot out of carts after a manner of stone to mend highways, and yet none of these broke; but this I suppose must be ascribed to the Nature of the Clay, than to the skill of the Artificer in making and burning them….”

During Georgian times in the 18th and early 19th centuries, local land owners and merchants wishing to improve their properties had them re-fronted with brick as a sign of their wealth. A degree of standardisation had been achieved by 1700 and a minimum size of brick confirmed by Act of Parliament of 1725: 9 inches long, 4½” wide and 2½” thick. The result was much neater and more regular brickwork. 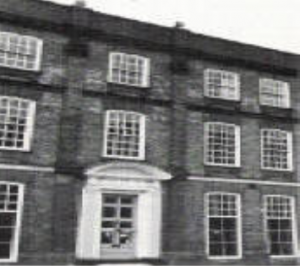 Calleva House in High Street, Wallingford is a fine example of an 18th century town house of red and silver Nettlebed brickwork with gauged window heads.

Nettlebed continued as an important centre for brick making from the 14th century through to the early 20th century and represents the longest unbroken tradition in Oxfordshire. After 1416-17 references to Nettlebed bricks, and to Nettlebed tiles

in the 1420’s and 30’s there is a break in documentation until the 17th century. This break is only partially filled by two potters, Henricus Potter in 1442 and Wm. Butler in 1560. These two may or may not have been making bricks and tiles as well as pots, as also was Gregory Frithe, who died in 1607 leaving his copyhold at ‘Claypitts’ to his wife. The first firm documentary evidence is for the Sarney family of Rotherfield Greys, who had a kiln in Nettlebed in the 1600’s. The Sarney’s kiln was close to the church and was criticised by the churchwardens in 1681 for ‘the unsightly piles of bricks and durt’ close to the church door. The Sarney family was involved in brick making in the village up until the early part of the 20th century.

The mark of Roger Sarney, brickmaker of Rotherfield Greys, on his Will of 1619. The mark may represent a brick mould.

Other families involved in brick and pottery manufacture in and around Nettlebed included the Surfields or Shurfields in the 18th century with kilns in the High Street, and the Perceys or Piercys, with kilns at Crocker End and Peppard Road. The Woods are recorded as making bricks, lime and pottery in the 1830’s – 40’s. The Hobbs and Thompsons took over the Nettlebed Pottery in 1847.

By 1877 the summit of Windmill Hill was surrounded by brick and tile works, many of these being one man businesses using small clamp kilns. The hillside would have been a highly industrialised scene, shrouded in smoke from the many types of kilns and churned into mud by clay extraction and cart tracks. A narrow gauge railway track ran from near the top of the hill into the Nettlebed Pottery yard where the remaining kiln stands today. The wagons filled with clay were hauled by ponies and steadied by a brake man as they descended the incline. A very different vista from what we see today with the old clay pits now covered with bushes and beech trees.

Associated with brick making, pottery manufacture was an even older industry with evidence of production in the 9th century in the county at Bladon, Woodstock and Nettlebed. The pottery at Nettlebed appears in the Stonor Estate accounts from 1417. Henricus Potter of Sibford appears in the Minister’s accounts for Nettlebed in 1442 as being ‘assessed for tax £10’ – there was no escape from the taxman even in those days. In the 12th century the product range was limited to cooking pots, shallow pans, storage jars, pitchers, lamps and fire pots. By the 13th century the range had much increased incorporating more sophisticated decoration techniques. The water jug in particular became highly decorated with yellow or green glazes.

The industry was hit by the economic recession of the 1650’s following the Civil War and did not pick up again until the 18th century. Pottery production at Nettlebed comprised essentially earthenware for every day use. By the mid 1800’s better quality white glazed pottery became available from Staffordshire, and Nettlebed potters turned to making money boxes, tobacco jars, and flower vases whilst at the same time still making bricks, tiles, and drainage pipes for agricultural use. Many Oxfordshire potteries went out of business at that time but Nettlebed survived until the 1920’s when the local clay sources ran out. 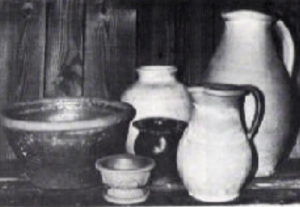 Nettlebed pottery from the village and church : pancheon,rusticated flower pot, vase, two jugs all of red earthenware, and a large shouldered jar of grey/buff earthenware. 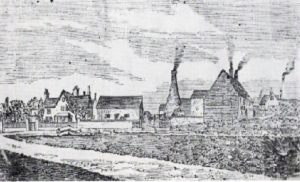 Apart from the old clay workings on Nettlebed Common the only evidence of an historic and one time flourishing industry is the bottle kiln in the village close to the Henley-Oxford road. This up-draught kiln, of which there were several on this site and elsewhere in the village, is also typical of many others used in Oxfordshire but which were demolished when potteries and brickworks closed down. The bottle kiln is the only one of its type preserved in the country today. It was built in either the late 17th or early 18th centuries. It was converted to a downdraught design in the early 1900’s for lime burning and was in use up until 1938.

The sectional diagram indicates how the kiln operated. After the firing chamber was loaded with between 12,000 and 18,000 bricks and the loading door sealed with fired bricks and wet loam, a wood fire was lit in three flues under the firing chamber floor with wood fuel being fed through the stoke holes. The kiln was then allowed to burn for two or three days This dried the bricks before the actual baking was achieved by means of coal firing for 36 hours at a temperature of 950 degrees Centigrade. Warm air and gasses passed along the flues and were drawn upwards by the bottle shape of the kiln through the carefully stacked bricks. More efficient downdraught kilns were in use in Nettlebed alongside the bottle kilns in the 19th and 20th centuries.

Many challenges were faced by the people of Nettlebed to preserve this one remaining kiln but with the support of local benefactors and the help of Oxfordshire County Council, who maintain the structure today, the restoration was completed in 1975. The kiln may be viewed at any time and a display board close by describes its history and how it was operated. 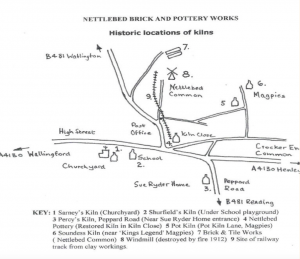