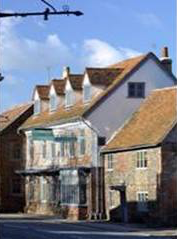 There has been an inn on the site since the 15th century which was previously known as “The George”. In 1456-7 John Wattes held the licence for the inn and paid a rent of 8 pence per year. A ten year legal battle arose in 1504 when the new owner of the George, Thomas English tried to evict the previous tenant, John Wise who refused to move out.

The name was changed during the Tudor Period to the White Hart, probably to reflect the resurgence in the popularity of the monarchy. Hunting was a favourite sport of King Henry VIII, and a white hart is a famous old English hunting symbol. The White Hart became a posting house at the time of the name change, where wagons would stop and collect post and parcels for carriage to London, Oxford and Henley. Nettlebed had at least three inns at this time, for in 1536-37 the three Innkeepers where fined for overcharging!

The WHH was used during the English Civil War as a billeting house for loyalist Cavalier troops. King Charles I fled to Nettlebed after his defeat at the Battle of Reading in 1643. It is not known whether the King himself visited the WHH, as he would have probably descended on the manor house to stay in, but his troops stayed in the WHH prior to their surrender. Both Royalist and parliamentary soldiers had a habit of lodging in local taverns where possible. The horses were kept in Nettlebed Church.

Nettlebed was an important staging post on the rough roads between Henley and Oxford and Wallingford. Henley was an important glass making town in the Stuart era, whilst Oxford and Wallingford were important regional centres for trade and agriculture. Five pubs are reported in Nettlebed by the seventeenth century. The Bull Inn, the Red Lion and The White Hart were situated on the main Oxford to Henley Road, and therefore attracted the main trade.

Later in that decade Bishop Rawlinson stayed at the White Hart whilst writing his “Parochial Collections” in 1718. This was a collection of academic writings regarding the parishes of England.

In de Laune’s “Present State of London” of 1681 there is a reference to the carriers John Rotham and Sylvanus Wiggans from Wallingford who travelled between Nettlebed and London carrying goods and passengers. The horses for the coaches would have been changed and refreshed at the inns in Nettlebed, and many of the passengers and goods would have been accommodated at the White Hart.

With the establishment of the Henley and Dorchester Turnpike Trust in 1734, powers were taken to turnpike the road to enable a quicker and more comfortable service to London. The road was metalled in 1736, and the wagon trade grew between Oxford, Henley and London. Nettlebed’s inns became very busy with the additional trade.

We learn more of the role of the carriers and the WHH in a directory of 1738 “The Intelligencer” or “Merchants Assistant” published by Meadowes, Gilliver and Clarke. This listed the goods and passenger services to and from London and shows that Nettlebed was served by two carriers in 1738. Services were run to the King’s Head in Old Change, near Farringdon arriving every Tuesday, and in summer an extra service ran to the White Horse in Fleet Street.

There was an additional service recorded in the Universal Directory of 1790, run by Thomas Brooker & William Cooke, who ran wagon services from Nettlebed to the Bell in Warwick Lane, London.

Nettlebed was an important changing post as the road to Henley was turnpiked in 1736 and incurred a toll for carriers to use it. The former toll lodge remains at Port Hill. This meant that several services used the alternative road via Peppard to Reading which was not turnpiked and was therefore free to use. This meant that the more cost conscious traveller could disembark at Nettlebed to change wagons, and avail themselves of the refreshments and rooms offered by the inns, including the WHH.

A more regal visitor to Nettlebed was George III and his wife Queen Charlotte of Mecklenburg, who dined at the Red Lion in 1784. In order that “no jealousy will be excited” the king gave a guinea to each of the other public houses including the White Hart. 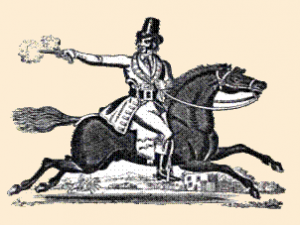 During the 17th and 18th centuries travellers in the area were at the mercy of highwaymen who hid in the woods near Nettlebed and pounced on unsuspecting coaches and terrorised their occupants. A notorious young highwayman named Isaac Darkin operated on the road through Nettlebed until 1760 when he was arrested when letters he sent to his accomplice in London were intercepted in Henley. He was convicted at trial and hanged in March 1761 at Oxford Gaol. After his execution his body was horribly mangled to prevent it being used for medical research, according to the Oxford Journal of March 28, 1761. The last highwayman caught in Nettlebed was “Curly Bill” or William Fisher, who was transported to Australia in 1835.

The earliest reference to the WHH by the current brewers Brakspear in a rent ledger of 1796, where the tenant was recorded as Sam Clements. This was hand written by Robert Brakspear who founded the Henley based brewery in 1769. He joined with his uncle Richard Hayward ten years later and the business expanded, acquiring inns in and around the Henley area.

In 1826 the landlord of the WHH had changed to a Thomas Risley, and the rent was being collected by one of the partners in the enlarged Brakspear Brewery. By this time Robert Brakspear had passed on and the company was run by his son William, whose name it now bears.

In the 1840’s Lord Camoys owner of the Stonor Estate, owned much of the land in Nettlebed. He is recorded as owning the freehold of the WHH in 1842, with W.H. Brakspear Ltd renting it from the estate.

The establishment of the National Census in 1801 allows for the detailed registration of the British population, though it was not until 1841 that the results were officially collected by the General Register Office and kept for posterity. The information prior to the 1841 census has mostly been lost.

In the 1841 Census records for Henley show that Jane Dyer was the innkeeper of the WHH. Aged 50 she had three children who also lived and worked on the premises.

By 1851 the innkeeper was Henry Giles, who was born in Twyford in 1801. His wife Charlotte had died in 1845 at the WHH and she may be the reported ghost that haunts Butterscotch. The name Catharine has been associated with this ghost but any further details are not known

This part of the hotel was formerly a separate cottage but was added to the WHH to provide further accommodation for the publican. The coat of arms above the fireplace in Butterscotch is that of the Cecil family, who had links with the manor of Nettlebed through their ownership of the manor titles in the 14th century. This demonstrates that this part of the current hotel is older then the present White Hart. This building was listed at the same time as the WHH in the late 20th century.

The WHH came under Brakspear’s direct ownership in 1908, when they brought the freehold from the previous landowners. The stable block at the rear of the Hotel, which contains Blackcurrant, and Mulberry was built by Robert Fleming in 1913. It was extended again in 2001 to provide additional rooms called Muscat, Olive, Spearmint and Caramel. These names were chosen by a previous licensee, Chris Barber to reflect the simple clean culinary flavours of the rooms, and are decorated to suit. 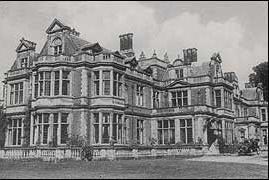 Mention should be made at this point of the Flemings who bought Joyce Grove in Nettlebed, now the Sue Ryder Home palliative care home. Robert Fleming bought the estate and titles to the manor in 1903 and embarked on a series of improvements to his estate and village. This included the diversion of the main Henley Road away from the house and the absorption of the green into the current house grounds.  Thought was also given to improving the facilities at the White Hart, hence the extension of 1913. The plans for the extension are still available to see at the County Archives in Oxford.

Recent filming has also occurred at the WHH, with an episode of Midsomer Murders with John Nettles recorded in the bar in the summer of 2003. The BBC has also filmed reports for BBC Breakfast News in the hotel.