Nettlebed minted its own coinage in the 17th century.

The turmoil of the English Civil War 1642-1651 caused a shortage of small coinage such as farthings and halfpennies (pr. ha’pennies) which had stopped being minted by the Government.  This was a problem for local tradesmen, particularly alehouse keepers. To counter the shortage “token money” was produced in many towns and villages such as Henley and Nettlebed and for twenty-four years 1648-1672 the currency of these privately issued tokens, defined as “money of necessity”, was not challenged by the authorities.

Tokens were issued in Henley and other larger villages by many traders between 1669 and 1672 who were required to pay a local tax based on the number of smelting “hearths” they operated. The taxation records show that two tokens were issued in Nettlebed, with its busy coaching inns and thirsty brick and pottery workers. David Gasquon at The Bull paid tax on ten hearths in 1665 and Timothy Holding at The White Hart paid tax on one hearth. A White Hart “HALFE PENNY”(sic) token (diameter 20 mm) dated 1669 was recently discovered 347 years later during the recent restoration of a 17th century cottage in the village of Ashampstead near Newbury, Berkshire when a carpenter accidentally put a foot through the upstairs floorboards and the coin was found in the debris below.  It is possible that it belonged to a journeyman carpenter employed in the building of the cottage. Such skilled carpenters travelled widely for work. This unknown artisan might have hailed from Nettlebed or had possibly carried out work at the White Hart and received the token as change or payment.

The embossing on the base metal trade token reads:-

A symbol of a horned stag appears in the centre. Timothy Holding was the joint licensee of the White Hart with his mother Elizabeth after his father died in 1665.
This ancient token is now lodged in the historic coins and tokens collection at the Museum of Oxfordshire in Woodstock, OX20 1SN. 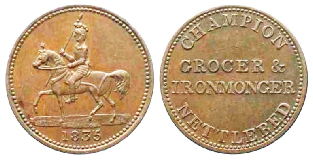 Trade tokens continued to be issued by inn keepers and tradesmen from time to time in the 18th century to supplement for the lack of small coinage minted by Government although no Nettlebed examples of that period exist today. During the early 1800s William Samuel Champion had a business in Watlington Street, just below the old Sun inn, described variously in the Gardener’s (1852) and Post Office (1847&1854) Directories as “grocer, draper, ironmonger, stationer, druggist and manufacturer of British wines.”

A sample token issued by him, now referred to by coin collectors (Numismatics) as “Champion’s Nettlebed mounted knight farthing 1835”, diameter 21mm, has recently been discovered. The obverse shows the wording “Champion Nettlebed, Grocer & Ironmonger” and a mounted knight on the reverse with the date 1835. The figure is thought to represent the King’s Champion, making a play on the issuer’s name.

Tokens were issued by a wide range of tradesmen at the time to encourage trade. Some owners of businesses paid staff with tokens which could only be used to buy goods from the employer often at highly inflated prices which meant a lowering of actual salary and disposable income.  However, tokens had a fatal flaw – they could generally only be used in the shop or inn that issued them. So their decline was inevitable helped also by official crackdown. The Champion token is now also in the Museum of Oxfordshire Museum.

William Champion appears to have gone out of business around 1855. There does not seem to be a family connection with Champion’s ironmongers in Wallingford and Henley (now closed). He is recorded as trustee of the newly established Nettlebed Congregational Chapel in 1840.