Nettlebed Congregational Church – early services were held in a tent on The Common. 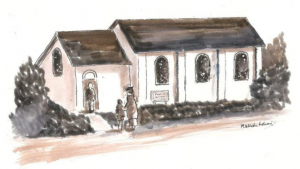 The Rev. Robert Bolton, an American born in Savannah, Georgia, in the United States of America, became pastor of Henley Congregational Church in 1824. He came from a long family line of non-conformists who, originally from the cotton trade in Bolton, Lancashire, had emigrated to the American Colonies in the early eighteenth century. Clearly an energetic man, when he came to Henley Robert set about spreading non-conformist beliefs in the outlying villages. When the Rev. Bolton received Mr Joseph Fletcher into Henley Church membership on 1st June, 1831, he encouraged him to lead the Christian work in the neighbourhood. One Sunday afternoon in 1832 Fletcher was delivering tracts on Nettlebed Common. A number of youths were then playing cricket. He invited them to come into a nearby cottage and hear a book read. Two young men followed him, with the result that they became Christians. Regular meetings were then held in the cottage until the numbers grew too large, and they were offered the use of a carpenter’s shop. A little book, two and half inches by four, contains in beautiful copper-plate writing this appeal dated June 1838:
“At the neighbouring villages of Nettlebed and Crocker End, some efforts have been made during the last six years to supply the inhabitants with religious instruction. During the summer months they have met under a tent, erected for the purpose, and in the winters of the last three years a carpenter has given the use of his workshop. This accommodation, though readily granted, is not sufficiently large for the purpose. The people manifest the desire they have to attend by the efforts they have made amongst themselves, and they are now subscribing sums towards the erection of a chapel. To encourage them in this effort, your benevolent contributions are respectfully solicited.”
James Rowland was present at the laying of the foundation stone on 22nd August, 1838. The first trustees of the Nettlebed Chapel in 1840 were: Peter Sarney Benwell, John Benzeville Byles, John Cook, Joseph Charters, Samuel Cripps, William Champion, William Rivers Fletcher, Joseph Fletcher, Thomas Fox, John Demezy Goodchild (a man from a Stratfield Turgis milling family who had married an Ann Demezy), George Rigden on to Brown’s yard Mummery, George Soundy, and George Young. P.S. Benwell, a blacksmith, made a large circular candle-holder which was in the church until 1936, although by then oil lamps had long superseded candles. In 1936 electric light was installed and a new heating apparatus.

For many years the services were conducted by missioners from the Henley Home Missionary Society, the first agent being Mr. George Lamb, who was appointed in October 1839, and paid £70 a year for his labours in the villages. Later the pulpit was supplied by students from Hackney College and by lay-preachers, who did not have an easy task, often walking the five miles to Nettlebed and back, and in all weathers. A cycle was presented by Mr H. M. Ward, of Henley, for the convenience of preachers going up to Nettlebed. When the Rev. C. Williams was minister of Benson Congregational Church he undertook the oversight of Nettlebed from 1901 to 1905, but the responsibility returned to Henley when it became a branch church.

Dr. Rowland preached his first sermon in 1859 at Nettlebed when he was nineteen years of age. His father had given him this counsel:
“When preaching, think of the old woman at the door. Speak loud enough for her to hear, and simply enough for her to understand”.
He described his first sermon in these words:
“My text was ‘Believe on the Lord Jesus Christ, and thou shalt be saved’. The poor little sermon was first preached in Nettlebed Chapel, five miles from Henley, and associated with the Henley Church. As I was being driven up the long hill in a Farmer’s cart that Sunday afternoon, I felt like one of the martyrs on his way to Tyburn, and was terror-stricken when I found the little building crowded to excess with people drawn by curiosity or friendly interest to hear the son of their honoured minister. But I still remember the comfort I received after the service when Mr. Fox, a stalwart blacksmith and an equally stalwart Nonconformist, clapped me on the back, saying: ‘You’ve done very well indeed for a young ‘un. You come again, will you?’
The sermon at least had the merits of simplicity and brevity, for I remembered my father’s sententious advice: ‘It is better to send people away longing than loathing’.”

The Centenary of the opening of the Nettlebed Congregational Church was celebrated in June, 1938, when the preacher was Dr. A. D. Belden, of Whitefield’s Tabernacle, London. The Leverett family in Nettlebed were staunch members of the church. Charles Leverett was a lay preacher and his wife Alice cared for the building for many years until it was closed. 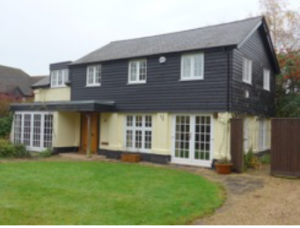 It was converted into a house in the 1970s and which can be still seen in Chapel Lane today.