A Royal Sanitary Commission of 1869 suggested a system of local government incorporating rural areas. This led to an Act of 1872 which, amongst various recommendations, created ‘Rural Sanitary Districts’. These authorities had to appoint a ‘sanitary inspector’ and a ‘medical officer of health’. The existing Henley Board of Guardians created a new authority under the name ‘The Henley Rural Sanitary Authority’. In 1873 it appointed George Shadrach Daniel Mattick as Sanitary Inspector; he was 37 and had worked as a builder and a ‘Scripture Reader’ in the very poorest parts of Southwark in South London and Reading. It was the beginning of modern local government in Oxfordshire. On his arrival he immediately reported on his visits to the surrounding villages.
About Nettlebed he wrote: – “The village presents about as bad a collection of sanitary conditions as it is possible to conceive existing in a situation in many respects naturally very healthy. Water there is none. Drainage much worse than none. What there lies fermenting in an open ditch on the Common, just at the top of the principal street of the village….the cottages are generally horrible; some as bad as I have ever seen anywhere – small, filthy, dilapidated, unventilated and surrounded by festering heaps of filth”.
In 1894 Parliament created new local authorities called ‘Rural District Councils’. The Henley Rural District Council, which did not include Henley town, came into being. It was mainly responsible for public health, the maintenance of roads other than main roads, and the collection of rates from the twenty rural parishes within ten miles of Henley. 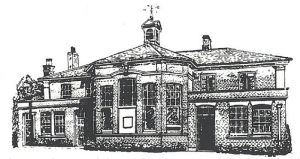 The Board Room of the Workhouse now Townlands Hospital where the Henley RDC met from 1894 until 1952. Erected in 1834 the building still stands.

Fresh water was a particular problem for many villages in the Chilterns due to the lack of springs. In dry summers water had to be brought several miles from the Thames in horse drawn carts. 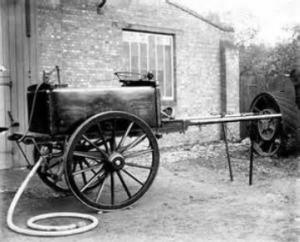 Many villages had to rely on local ponds for water. This meant the water was often contaminated leading to health problems. Recurring infectious diseases such as scarlet fever, diphtheria and typhoid fever posed major problems, especially amongst the young.
Perhaps because of its higher elevation than the reservoir at Woodcote from where piped water gravitated to many local villages, Nettlebed did not get a piped supply in the 1870s and 1880s. It is said that Robert Fleming, the Scottish banker who rebuilt Joyce Grove House in 1905/6, offered the village piped water or a working men’s club in return for the village cricket club releasing their ground at the gates of his new mansion. The villagers opted for the club which was opened in 1913. In 1906 Robert Fleming did provide a sports ground and pavilion on land reclaimed from the brickwork’s clay excavations. He also offered land on Windmill Hill for a water reservoir. (See note regarding Robert Fleming’s public notice in 1905 in the local newspaper concerning his offer of common land and laying out of the recreation ground).
Many large houses such as Joyce Grove, Soundess and Nettlebed House had ‘Chilterns cisterns’ for rainwater gathered from their roofs. Poorer dwellings, many of which were thatched, were not able to take advantage of this opportunity. Water from the large roof of the new Working Men’s Club was collected in two brick lined underground cisterns and villagers had use of a pump outside the building on the High Street. New Nettlebed Estate houses built on the High Street also had rainwater cisterns. 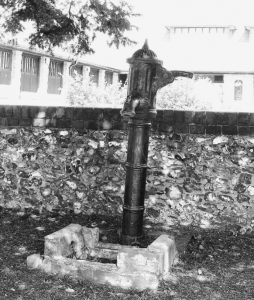 The old hand pump outside the Village Club today

The lack of piped water in many villages was largely due to the reluctance of many householders to pay for it. For example in April 1925, after the HRDC had connected new council houses to the main at Shiplake and increasing the rent by 3d a week, several tenants asked to be disconnected as they could not afford the water rate.
At Nettlebed in May 1924 Robert Fleming contributed £4000 towards South Oxfordshire Water Company’s costs of piping mains water to the village – a considerable sum at that time.
In 1894 under the Local Government Act the responsibility for main roads and some streets in towns had been transferred to county councils. Oxfordshire County Council was responsible for the Henley-Nettlebed-Dorchester road. This was a section of the original turnpike trust of 1736 which formed part of the major route from London to Gloucester and Hereford. 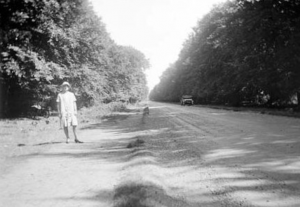 The Nettlebed-Henley road in the 1920s – rolled chalk & flint.

The HRDC struggled financially to maintain the local byways and considered them a low priority although the new motoring road users were vociferous in their criticism of their deplorable condition. Eventually in 1930 OCC assumed responsibility for the direct control of all the rural highways. Gradually both the main and rural roads received tarred surfaces.
As motoring became more popular the HRDC took responsibility for licensing shopkeepers to sell petrol which was usually dispensed from large drums. Nettlebed grocers such as J.Bernard & Co and T.Saunders & G.T.Heath sold petrol from drums on the High Street.
The construction of new public sewers fell a long way behind the HRDC social housing programme. In 1953 a sewerage scheme was in preparation for Nettlebed but by 1974 few houses were being served by the scheme. Until 1968 there was even a ‘night-soil’ collection service for the pail closets in the village. Many newcomers to the area were astonished to find the Henley rural district so backward.
Residents in Nettlebed today must feel fortunate that there have been so many improvements in the quality of life in our village and the surrounding district. 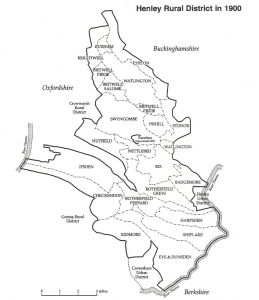 Bix Parish boundary came nearly as far as the centre of Nettlebed close to the Watlington Street junction. The boundary was changed in 1932.

Note
Below is a copy of the notice published on behalf of Robert Fleming in the Henley and South Oxfordshire Standard, Friday, 24th November, 1905, regarding common land on his newly acquired Nettlebed estate and the provision of a sports ground and pavilion and space for a reservoir on Windmill Hill.

At the request of Mr. Robert Fleming’s representative we publish the following:-
“The Commons and Footpaths Preservation Society having again approached me as Lord of the Manor on the subject of placing these Commons under Public Control, and securing for ever from the destruction of the natural beauty of the Commons, while not interfering with existing rights, I have consented that the preliminary steps be taken for obtaining Parliamentary Power to carry out this on the broad lines indicated in the scheme which has already been explained in detail to the Council.
The main suggestions, so far as Nettlebed Common is concerned, are, that I should give to the Public the valuable freehold land on the summit of Windmill Hill, with the exception of the windmill itself and convenient access thereto and a space for water supply, and I also under-take not to cut down the trees that now form so attractive a feature of the Commons.
I may mention that a careful estimate of the Pine Wood near Windmill Hill, which is now so attractive an amenity to the neighbourhood, placed the present cutting value of this wood alone at over £1000. On the Common generally there is a large amount of timber, the cutting of which it is proposed to restrict so that the beauty of the land can never be interfered with in the future.
I have also agreed to expend a large sum in improving parts of the Common, especially the large area of the clay digging ground, and places where stagnant water accumulates, and also to restrict the ground where the clay may be dug in future, as well as to make good a road around the Common – the Northern part of which is practically impassable.
I have also promised to lay out a conveniently placed cricket and football ground on the Common and erect a pavilion.
The Common will thus remain for ever as an open space, properly regulated in the public interest.
The Society on their part agree that a small strip of ground between Joyce Grove and the Reading Road should be enclosed by me and that a few unimportant rights of way, now little used, should be discontinued.
These are the broad lines of the proposal as far as Nettlebed is concerned. They are made on my part in the belief that the people of Nettlebed will derive great advantage from them, and indirectly through the work that will arise in connection therewith, Nettlebed, for two or three years at least, will continue to be prosperous and out of the “unemployed” area.
As far as the Commons and Footpaths Preservation Society is concerned they are of course, put forward purely in the public interest.
I write this short note so that the Parish Council and the people of Nettlebed should know that nothing is proposed that can be other to their advantage.
The Commons and Footpaths Preservation Society will no doubt submit the matter to you in a more official manner at a later date.
(The Commons & Footpaths Preservation Society was the forerunner of today’s Open Spaces Society. It was formed in 1865.)